Nine years ago, a group called Friends of Murphysboro teamed up with Big Muddy Brewing to create the Big Muddy Monster Brew Fest. People who live in southern Illinois know the history of the Big Muddy Monster. This area is also becoming quite proficient in craft breweries. So it only made sense to marry the two and create this event. 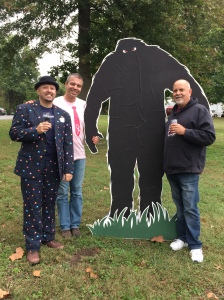 I attended my first Big Muddy Monster Brew Fest in 2016. I had a blast with my buddy and fellow Craftbeerican Tom Harness. We returned a year later and more good times and blurry memories were made. What I love about this event is being able to try a variety of beers made here in southern Illinois and beyond. For most of my beer consuming years, it’s been selections like Bud Light and Blue Moon. Since joining the Craftbeericans nearly three years ago, my palate has been exposed to hundreds of new flavors and beer choices.

This year (2018) was another amazing year for the Big Muddy Monster Brew Fest. For the first time, my wife decided to attend the festivities. She doesn’t often drink and when she does she prefers mixed drinks or ciders over the traditional beer. With a group of friends, we enjoyed the more than 300 selections (although we didn’t really drink 300 beers), the fun games and just hanging out with our friends and making new ones. Plus who doesn’t love a chance to meet the festival’s namesake, the Big Muddy Monster?

The food was on point with 17th Street BBQ, the Burger Shack and Haute Wheels. I couldn’t think of a better way to spend a Saturday afternoon. Mother Nature could have made it about five degrees warmer but at least there was no rain.

To date, (not counting 2018) more than $90,000 has been raised by the Big Muddy Monster Brew Fest for the Murphysboro Splash Park which is being built at Longfellow Park in Murphysboro. It’s a great way for the community to come together and support a great cause and enjoy some wonderful locally and regionally crafted beer. Cheers to the Big Muddy Monster Brew Fest and all the volunteers who work to make it happen!