For 17 years the country has continued to heal from the wounds suffered during the Setepmber 11 terror attacks. I’ve documented my thoughts about that day in numerous blog posts, including a visit to the memorial site in New York. But for the first time in many years, I was able to participate in a local commemoration of the day. 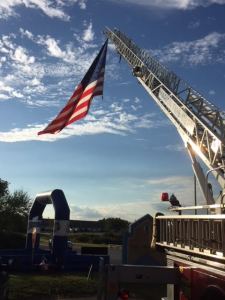 The Run to Remember is a 5K event put on in southern Illinois by Run to Succeed Sports. The event is a benefit for the local chapter of Team RWB (Red, White, Blue) and the Marion, Illinois police and fire departments. The show of patriotism was amazing.

A massive American flag hung from the Marion FD ladder truck. Men, women and children from all walks of life dressed in red, white and blue. Veterans ran with flags. It’s hard to put into words what it meant for me to be there.

After I listened to the last few minutes of a podcast I had been listening to prior to the race, I unplugged my earbuds and used the remainder of my time on the course to reflect about the day. The sun was beginning to set as I approached the final stretch. A veteran in front of me was running with the flag and the way the sunlight hit the stars and stripes was awe inspiring.

That scene and the silence I enjoyed while running provided me time to reflect on the day. I not only thought about the events that happened on 9/11, I also thought about our country today. As a young father on the day of the attacks, I worried about how our world would change and the impact it would have on my two sons (ages 20 months and 2 months at the time). 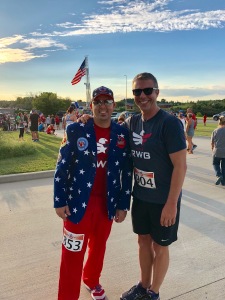 I got my second wind on that final leg of the run and pushed passed the nagging pain in my ankle and knee after 863 days of running. I thought of the lives lost and those who sacrificed their own that day. I also thought of the men and women who have and continue to serve our great country. Despite our differences that boil over on social media, we’re all Americans. That is something we should never, ever forget.