As parents, we usually get involved with our child’s activities. Whether it’s standing on the sidelines as a coach, becoming a scout leader or spending time helping at a PTO event; most parents want to help. I think at the core, most people will volunteer, you just have to ask. That’s where Denise Glennon enters the picture.

I met Denise more than a decade ago through the Cub Scouts. Our sons are a few years apart in age and Denise was a Den Leader in those days. She took many new leaders under her wing and helped them along the way. I recall our monthly committee meetings and Denise talking about all the other groups she was involved with.

She described herself in those days as a professional volunteer. I know she was staying active with her oldest son’s scout group as well as her youngest son’s. Just off the top of my head, there was also band boosters, Women in the Outdoors and the Carterville Historical Society which runs the Heritage Museum (and is staffed by volunteers like Denise). 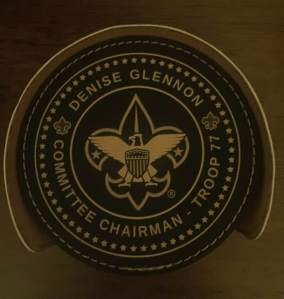 Denise’s boys earned their Eagle Scout rank years ago, but she continued to volunteer as a leader with the Boy Scout Troop. She has recently “retired” after 17 years in Scouting, having worn several hats in Pack and Troop 77. Denise was a den leader, Advancement Chair, Pack and Troop Committee Chairperson. She has played a role in developing not just new leaders but also young men who have gone on to become Eagle Scouts and contributing positively to society.

Denise’s mentorship helped me personally through a time of transition in our Pack. We were replacing a Cub Master who had served for decades and quite honestly it was a nerve-racking experience because I was stepping into that role. Denise was my right-hand woman serving as the Pack Committee Chair. Her advice, guidance and words of support meant the world to me and brought a calm to our entire leadership preparing for a new journey.

Like all of the GratiTuesday blogs, I know I only scratch the surface with the contributions made by the subjects. But I want to acknowledge people I know who are making a difference.

One thought on “GratiTuesday: Denise Glennon” Leave a comment ›