I still consider myself a newbie in the world of craft beer. Just over a year ago my buddy Tom Harness and I started seriously discussing doing reviews of craft beers on social media. From there, the Craftbeericans became a reality (although Tom and fellow Craftbeerican Todd Ellis had already had the name in place). So when we were all part of a cooking fundraiser (Chef Clash at the Arena) it only seemed fitting that I make something that involved craft beer.

I searched high and low for ideas and finally settled on Craft Beer Mac and Cheese. Tom made Beer Bottle Cap Brownies and Todd made bacon-wrapped venison. Together we, and 97 other men in southern Illinois helped raise $35,000 for two worthy charities in our region.

The Colorado Beer Girl was the origin of my recipe, but like I usually do with these kinds of events, I find something to add to it to make it more my own. Her recipe called for only cheddar cheese.  I am a huge fan of pepper jack, so I added that along with mozzarella and Colby Jack. In my version, there’s also bacon because, well why not?

The beer I used was Introvert Session IPA by Left Hand Brewing Company. I’m not a huge IPA fan in general because of the bitterness. But my taste buds must be evolving, because I find myself giving IPAs more favorable reviews when we drink them on Craftbeericans. I also had the Introvert Session on hand after a recording. I had picked it because I am left handed and an introvert, so it all made sense. Anyway, here’s the recipe. It turned out well as I had people return to my table for seconds. 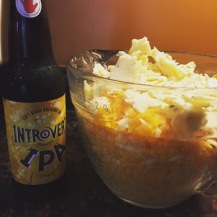 Craft Beer Mac & Cheese (and Bacon)2 cups macaroni, cooked according to the package and drained

2 cups macaroni, cooked according to the package and drained

2 tablespoons of butter (use olive oil for a healthier substitute)

1 package of real bacon bits (I could have made bacon, but I was lazy.)

Heat a saucepan over medium heat and add butter. Once melted and sizzling, whisk in flour to create a roux and cook until bubbly and golden (about two minutes). Add milk and beer into a saucepan, whisking constantly, then add cheeses and stir until melted. Turn down heat to medium and continue to stir, cooking for 5 to 6 minutes while mixture thickens. Stir in bacon bits, pepper, paprika and nutmeg.

Add noodles to a casserole dish, then pour cheese over the top, mixing gently to combine. Top with panko bread crumbs and bake for 25 to 30 minutes or until bubbly and golden on top.

Remove from oven and let stand for five minutes.