A couple weeks ago I announced on this blog my buddy Tom Harness and I had launched the #UglyChristmasSuit Fundraiser. Our goal this year, $5,000 for the Honor Wreaths for Veterans program. Donations are still coming in, but I’m happy to report we’ve topped our goal and in a short order too. However, everything came to fruition today (Saturday, Dec. 15) with the laying of the wreaths.

National veteran cemeteries around the country held ceremonies today. The Mound City National Cemetery is the about an hour away and the final resting spot for some 9,000 veterans. I arrived about 20 minutes before the ceremony was to begin and the parking lot was already full. I parked about a half mile down the road and took a shuttle to the cemetery.

After the opening ceremony, it was time to lay the wreaths on the headstones. As I mentioned, there are about 9,000 veterans. We had just over 2,500 wreaths to put out, which obviously means not every grave was covered. I had an overwhelming sense of pride working side by side with hundreds of people of all ages (toddlers to senior citizens) to honor and remember our veterans. However, I wished there were enough wreaths for each stone. 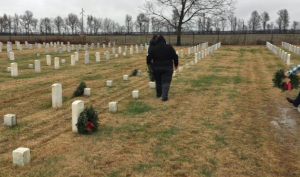 It was such an amazing sight to not only see all the volunteers in action but also the end result of thousands of wreaths on display. It’s a very simple and meaningful way to show our heroes they are not forgotten. Despite the rain, chilly temperatures and standing water around the grave sites, I thought the 90 minutes or so we were there was nothing compared to the sacrifices made by the men and women who have or who currently serve our country.

As we wrap up our fundraiser we know the money raised will be going toward next year’s effort as well. I’d love to see twice as many wreaths placed at the cemetery in 2019. Each wreath costs about $15 which would require more than $135,000 in donations. I suspect that number will be even higher by next year as more and more veterans from World War II are dying. If you want to help the 2019 effort make a donation here.

Thank you to everyone who supported the cause in 2018. I just wanted to show you all where your money is going when you make a donation.